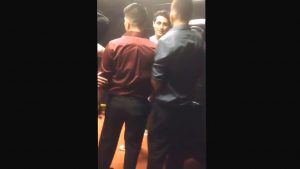 Weddings are joyous occasions. Two people who obviously love each other very much decide to take the next step and commit to each other before their family and close friends.

Weddings are one of the few times in life that social circles cross over. Countless times at wedding, people are left dumbfounded by the fact that they had no idea the couple was related to someone they knew. 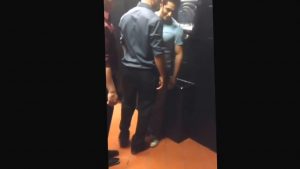 But this melting pot can also have detrimental effects, especially when you have a few beefcakes in the mix.

The video below was shot in the bathroom at a wedding and shows when people really don’t get along despite the joyous festivities going on in the other room. 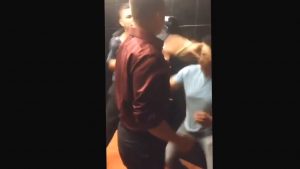 The assault begins with a verbal spout in the bathroom between a guy in a blue t-shirt and a few lads who have tarted themselves up for the big day (nothing screams class more than a black shirt and a waistcoat).

We don’t believe the blue t-shirt guy is an invited guest, merely an unrelated patron of the venue – I mean who wears a t-shirt to a nice wedding? 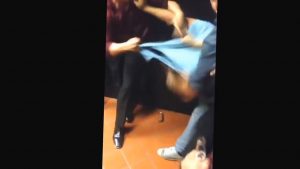 A gang of wedding guests crowds the man against the wall and we know there is no way he is getting out without a fight.

There is a lot of name calling and bravado before one of the beefcakes delivers a condescending slap to the guy in the blue t-shirt. He tells him to “know his place” which is a clear demonstration that these blokes haven’t evolved very far in life. 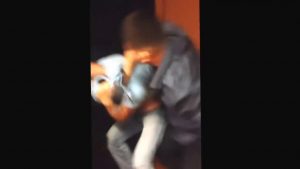 From the time the slap is delivered, the fight is on. The guy in the blue t-shirt is set upon by all 3 of the guys in a disturbingly one-sided bashing.

The assault lasts for a good minute and involves brutal strikes and feeble defense. 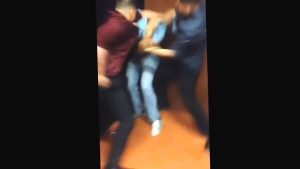 None of the perpetrators of the bashing get a scratch on them and after they leave the bathroom we see that the poor guy has had his t shirt ripped and his face split open something fierce.

He goes to the basin to wash up. You can watch the brutality unfold on the player below.

#Wedding Crasher Bangs The Maid Of Honor And Gets Demolished By The Groomsmen#ko #knockout #fight pic.twitter.com/JxSyZ9pkW9