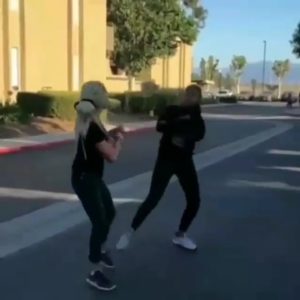 Whether it’s in the bedroom or out in the wilds of suburbia, we have all heard that big things come from small packages. Too often, though in fights, the little people have a tough time against the superior reach and strength that bigger people have. Sadly, bullies generally prey on their victims due to their physical prowess. But always remember that it’s not the size of the dog in the fight… it’s the fight in the dog that can be the determining factor! 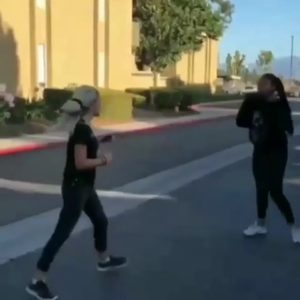 Here we have two girls who are going at it. We don’t know why and we can only speculate wildly about who kissed whose boyfriend or stole the other’s scrunchie. But they’re here, they’re angry, and they’re not leaving without a clear winner. Dukes, up, they circle each other and for two girls their age, show surprisingly good fighting stances. 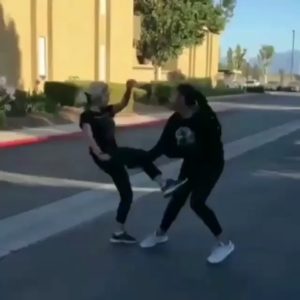 The shadows are long in the late afternoon sun as the two girls, one white blonde, one black are about to come to blows. The blonde chick gives a bit of trash to the black girl who gives it straight back with an attempted strike that gets nowhere near her opponent. We can see pretty early on that the blonde should make pretty easy work of this one. Perhaps she has even done some training in the lead up to the stout. 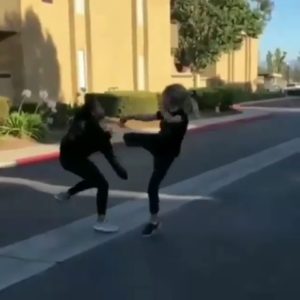 So often in street fights it becomes all about the punching. People are sucked into concentrating on upper body movements that they forget that the stronger limbs, the legs, are capable of far more damage. The black chick should have got the idea that the blond knew what she was doing from the first low leg kick that she was able to thwart. 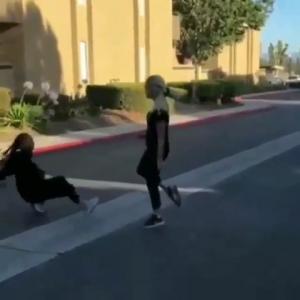 But the killer blow caught her unaware as the blonde leaned back to balance herself whilst delivering a kick to the head that would have made Bruce Lee proud. The black chick gets her head spun around and crashes to the bitumen.

#MuayThai Specialist uses her skills to Eliminate a Bully 3x her size pic.twitter.com/4RdTsed44m