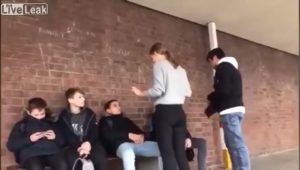 We hear all the time that men shouldn’t strike women. The general difference in size and strength means that most men are a lot more deadly with their bare hands than women could be.

In the video below, we see an instance where striking should not have even come into it. A group of students is sitting along a wall at lunch break when a bit of verbal trash talk has broken out. 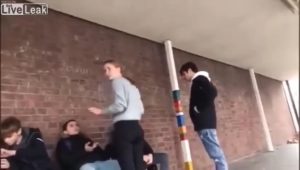 By the way they are talking, it seems the two know each other quite well. She stands over him berating him for something that he must have done. He sits with closed body language, taking it all in. We are not sure if he knows he is in the wrong, or if he is just calmly biding his time until the onslaught has been completed.

All of a sudden the video climaxes as the young lady give the bully a magnificent slap across the face that connects flush. He doesn’t seem to react at first, just taking the blow as those looking on absorb what has just happened. 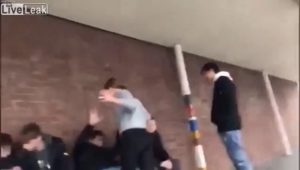 At school, it was always big news if the fists came out! Well, the young man rises to his feet and delivers a huge strike, closed-fist, to the lady’s face.

He head spins and she is absolutely shocked by the powerful blow. Given the fact that he is obviously stronger, there is absolutely no need to react with such a brutal blow. The young man makes a break for it, walking away in case things escalate. The young lady sits there, shocked and crying as he friends come to console her. 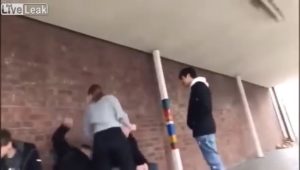 But she is angry, yelling his name before running over to tackle him. The young man, however his ready, grabbing her and executing a body slam before the camera turns off.