Colby Covington Losses Tooth In Altercation With Jorge Masvidal! “I Ran Away”

Apparently Jorge Masvidal who is from Miami heard about this and showed up. An Eye witness at the restaurant said “He walked up to Colby, said talk that sh*t now! then he hit him twice and colby went down. Colby then woke up and grabbed his phone and ran back into the restaurant and called the police”

Colby Covington and Jorge Masvidal got into a fight at Papi Steak restaurant in Miami Beach. I heard the fight was well done.

The witness said Masvidal was yelling at Colby as he ran back inside “Talking about my kids!”

Miami Beach police told TMZ reporters that in Colby’s statement, he doesn’t remember much, he was flash knocked out and only remembers getting up and running away.

Jorge Masvidal has spoken out amid reports he recently got into an altercation with fellow MMA fighter Colby Covington at a Miami Beach restaurant.

On Monday night, Fox Sports 640 South Florida radio host Andy Slater took to his Twitter account to report that former friends Masvidal, 37, and Covington, 34, “got into a fight” outside local eatery Papi Steak, before police were called to the scene. 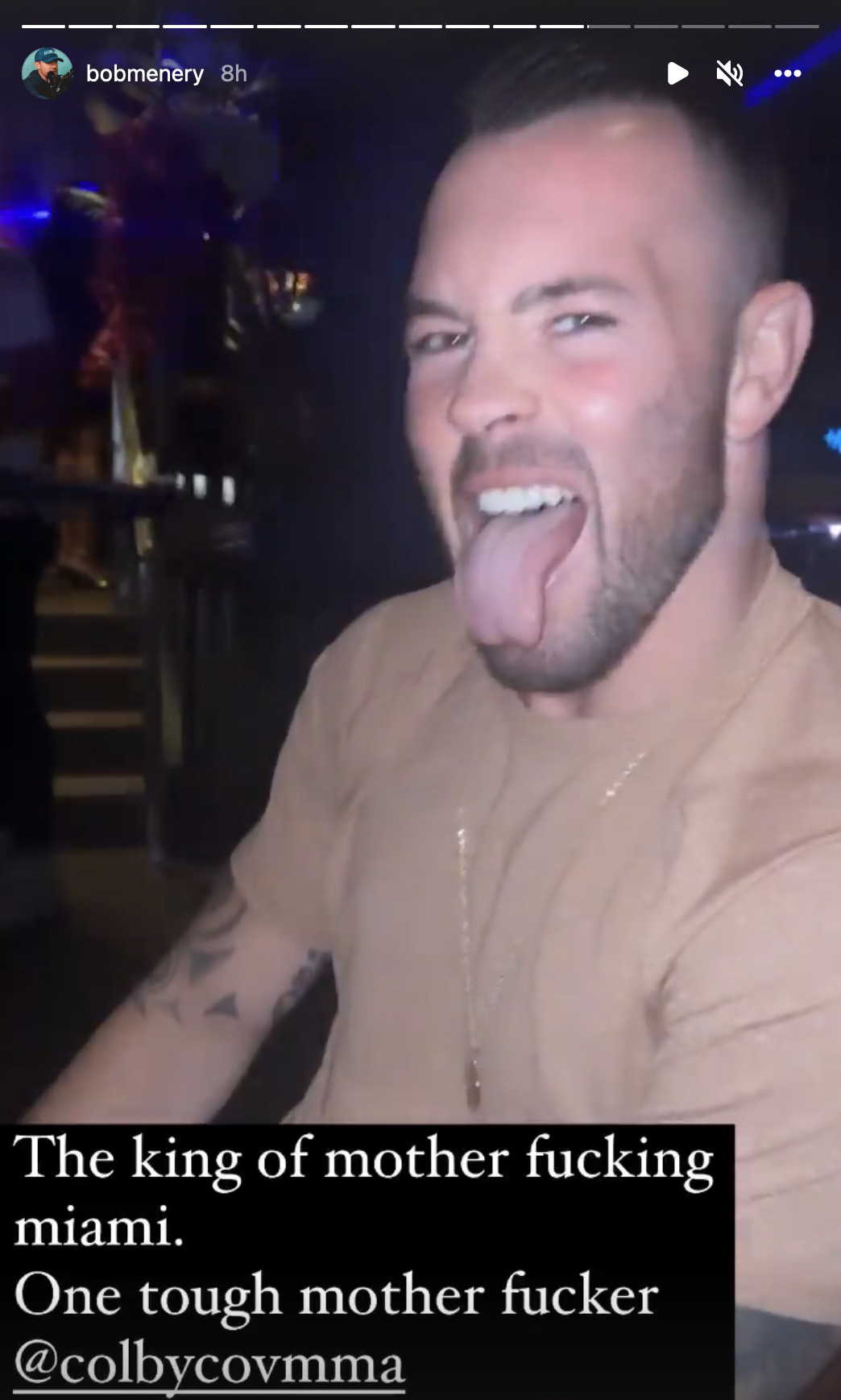 Soon afterward, Masvidal shared a video of himself on Twitter in a post, tagging Covington, who just over two weeks ago had defeated him in a UFC grudge match.

“Calling this the show-your-face challenge,” Masvidal said in the seconds-long clip, which can be viewed at the top of this article. “What’s up? I’m from Dade County. You talk that s***, you’ve got to back it up. That’s how my city rolls, man.”

In a further post shared on his Instagram Story, Masvidal also tagged Covington’s account as Kodak Black’s track “Super Gremlin” served as the soundtrack. A portion of the lyrics include: “Cause now it’s not safe for you / You switched like a p**** lil’ b****.”

Masvidal’s manager, Malki Kawa of First Round Management, chimed in on the situation, tweeting: “I’m hearing that a someone not from Miami who says he’s the king of it is missing a tooth. Can someone confirm this? I need the video asap.”

Some people stand up in the face of adversity, some run. #kom

Covington has referred to himself as the “King of Miami” on Instagram. He has also taunted Masvidal in a series of posts after defeating him in the octagon.

TMZ shared video footage of the aftermath of the altercation, Covington appeared to be recounting the events of the night as he said: “He’s over here swinging, trying to come at me, and I ran out the back of the room.”

You got to be from DADE county to understand

“How would he know I’m here?” Covington could be heard asking social media star Bob Menery, who responded: “I don’t know. You’re all over the internet.”

Newsweek has contacted representatives of Masvidal, Covington, the Miami Police Department and Papi Steak for comment.

Earlier in the night, Menery and YouTube stars the Nelk Boys posted video footage of Covington inside Papi Steak. In one clip shared by Menery, California native Covington was referred to as the “king” of Miami.

Colby talked about the man’s kids. I guess that’s ok in your world, no disappointment there. You sound like a grade a hoe. https://t.co/8BKeFrQkVl

Reacting to the fallout from the incident, podcaster Menery tagged Masvidal in a Twitter post as he said he was “extremely disappointed” in the way that things had played out.

“Never had a problem with @GamebredFighter,” Menery wrote. “Extremely disappointed in the way he decided to handle his ongoing ‘beef’ that has already been decided in a regulated platform.”

The regulated platform in question was the octagon at Las Vegas’ T-Mobile Arena, where on March 5 Covington dominated Masvidal in an uneven fight that was the culmination of two former best friends becoming bitter foes.