Yoel Romero continues to build momentum under the Bellator banner. The multiple-time UFC title challenger defeated Melvin Manhoef in the co-main event of Bellator 285. Romero (15-6 MMA, 2-1 BMMA) put on a dominant showing, stopping Manhoef (32-16-1 MMA, 4-5 BMMA) with brutal ground-and-pound in the third round of their light heavyweight contest. 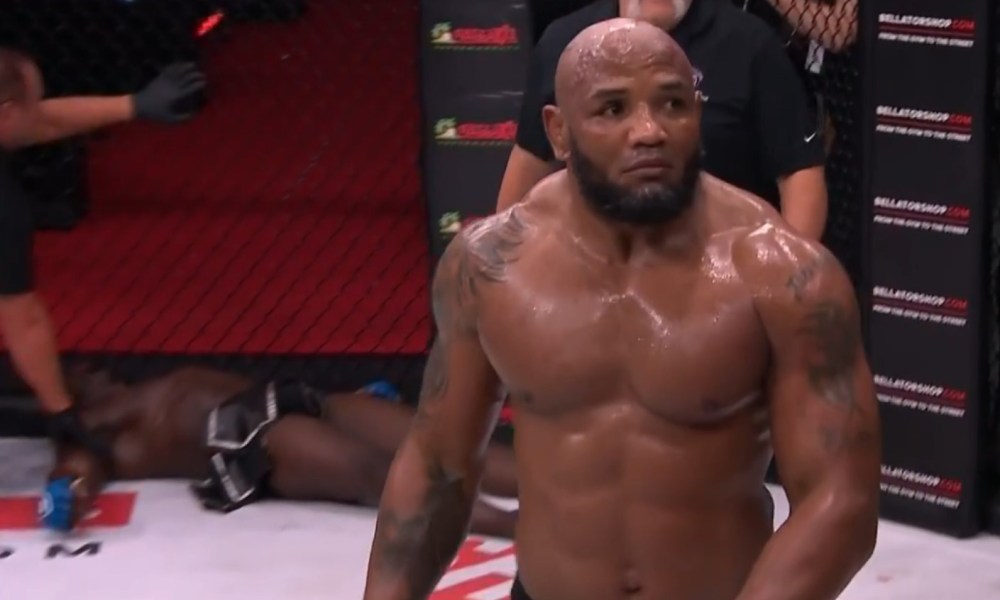 In the first round, Romero dropped Manhoef early with a leg kick and then followed him to the ground. From there, the former UFC title challenger controlled the action while landing ground-and-pound.

After a couple of minutes of control, Romero locked an Americana, but wasn’t able to finish it. He continued to control Manhoef from the top until the bell.

The second round was much more striking based. Both fighters exchanged at a fairly slow rate, but were still entertaining. 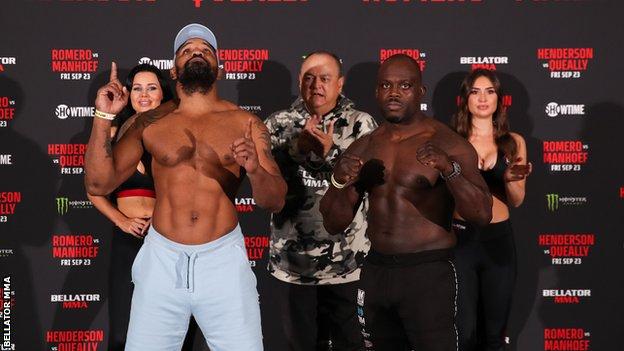 They were loading up plenty in their shots. Romero seemed to get the better of the shots and also had more volume. The threat of the takedown really seemed to hinder Manhoef’s output.

The third looked to be another standup fight, but three minutes in, Romero closed the gap and took down Manhoef against the cage. He stayed patient from half-guard and landed big shots.

The strikes began to accumulate and the referee had no choice, but to stop the bout. It was a dominant showing by Romero.

Up next at #Bellator285: Yoel Romero returns to action against Melvin Manhoef, who fights in his retirement bout.

Yoel Romero ensured Melvin Manhoef will not get his happy ending.

“The Soldier of God” scored a devastating third-round knockout of Manhoef on Friday in the co-main event of Bellator 285, which took place at the 3Arena in Dublin, Ireland.

After a measured first two rounds, Romero (15-6) upped his activity in Round 3, taking his 46-year-old foe down along the fence, then blasting him with huge punches and elbows that ultimately left Manhoef unconscious on the mat.

The official time of the stoppage was 3:34 of the final round. Afterward, Manhoef announced his retirement from MMA.

With this result, Romero is now on a two-fight winning streak since losing his Bellator debut. The Cuban fighter debuted for the promotion in September of last year, losing to former Bellator champion Phil Davis in a split decision.

He then followed up that performance with a brutal TKO of Alex Polizzi at Bellator 280 in May before Friday’s return.

Meanwhile, Manhoef finds himself in an opposite standing to Romero. Manhoef has now two defeats in a row, as he was previously finished by Corey Anderson back at Bellator 251 in November 2020.

The 46-year-old has been fighting professionally in combat sports since the mid 90’s. He told MMA Junkie in the lead up to Bellator 285 that this was the last fight on his Bellator contract and that he was likely going to retire.

After the bout, Manhoef made his retirement official and left his gloves in the middle of the cage.

Yoel Romero just knocked out Melvin Manhoef with some vicious ground and pound in the third round! 💥pic.twitter.com/F5xiLzevvH