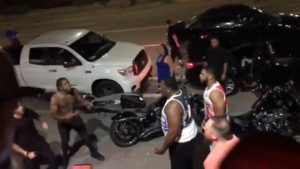 Groups of guys get into fights way more often than they should. Maybe it’s the alcohol on a night out, maybe they think an overly masculine display will impress the ladies, or maybe they are just angry people who are socially inferior. Whichever way you slice it, when the blood is up and the chips are down, that’s when people get hurt. The video below is a prime example of when things get out of hand and the consequences are pretty dire. 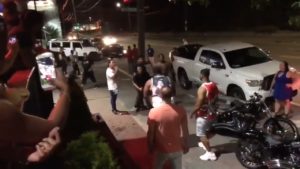 The clip opens amidst a chorus of “Wassups” as two groups of men egg each other on outside a nightclub, reportedly in Rhode Island. A skinny guy is baiting one huge guy, tempting him to lash out.

The big guy looks like this isn’t his first rodeo and calmly waits for the skinny guy to act. The skinny guy has his hoodie in his hand and uses it to whip the big guy from a distance, which must infuriate him to no end. 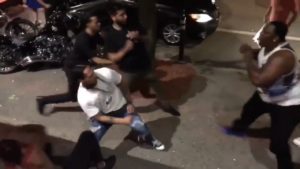 The skinny guy continues to bait the big guy, saying, “You got a hundred pounds on me”. A fair point is made by one of the onlookers in the crowd, who retorts, “Why you gonna fight him for, then?” A shirtless guy is also in the fray, hands at the ready. We can see that this situation is not going to dissolve without someone getting hurt. Then, on cue, one of the other men runs in to throw the first punch which sets a chain reaction in motion. The big guy, as thought, knows how to handle himself. 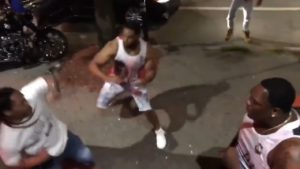 The big guy’s posse is at the ready and is incredibly quick to react. A number of dudes in basketball singlets come into the frame as the group of them dispatches the skinny crowd with ease. The shirtless guy has removed himself from the action, cowering behind his friends as the fight continues.

Then, as a guy in a white T-shirt and a braid is taking on the big guy, another member of the group comes in from the side and knocks him out He doesn’t see the punch coming which sends him flying backwards. 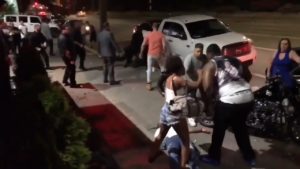 Hitting his head, sickeningly on the pavement. From the big guy comes in and gives him more attention, kicking his head before being ushered away. A number of onlookers are beside themselves with what has transpired, claiming that the man looks dead. At one point, a man is heard to say, “Yo, someone check on that dude.”. Then a bouncer enters and the crowd disperses. There are a number of phones that have recorded the incident that could result in a conviction.