MMA Fighting has BKFC 27 results for the Page vs. Perry fight card, a live blog for the main event, and more from the OVO Arena in London, England. In the main event, Bellator star Michael “Venom” Page will square off against Mike Perry in a welterweight contest.

Page will make his bare-knuckle debut in the main event, while Perry won his BKFC debut with a unanimous decision victory over Julian Lane this past February. Page came face-to-face with Perry earlier today in London and “MVP” towered over his “Platinum” foe. The Brit stands 6’3” and sports an 80-inch reach against 5’10” in height and a 71-inch reach for the Michigan-born Floridian. This weekend’s showdown will be contested in the promotion’s middleweight (175-pound) division. 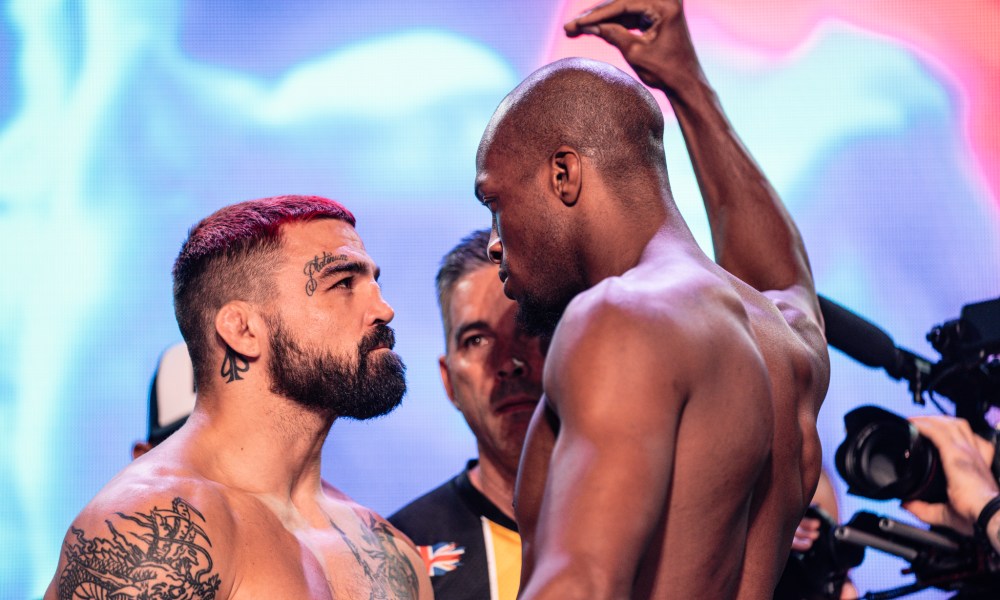 BKFC 27 will also feature the welterweight war between Connor Tierney (6-1) and Joe Elmore (2-1), along with a heavyweight showdown pitting Sam Shewmaker (4-3-1) against Mick Terrill (4-1), as well as a lightweight battle showcasing James Lilley (1-0) and Tyler Goodjohn (1-1).

Unfortunately, UFC veteran Paige VanZant was recently removed from the card and rebooked for the promotion’s next PPV card on Oct. 15.

“MVP has been doing good things in the fight game for a long time,” Perry told MMA Junkie on Thursday. “He’s knocked some people out, he’s made some highlights, the same as myself. I’ve done the same things.”

“This fight was talked about years ago, and it’s here now in bare-knuckle boxing, the realest of combat sports.”

An MMA fight between Perry and Page really wouldn’t have been possible “years ago” considering the UFC’s stance against cross-promotion with other organizations, but the two longstanding welterweights will do battle Saturday when they headline Bare Knckle FC 27 at Ovo Arena Wembley.

Perry, who fought in the UFC from 2016 to 2021, will make his second BKFC appearance after winning a five-round unanimous decision against Julian Lane this past February.

Page, who remains under contract with Bellator, is competing in a bare-knuckle boxing match for the first time after Bellator president Scott Coker signed off on it.

Perry called this “the biggest fight of my life” – and of Page’s life. Even though Page is well versed in MMA and has competed in both boxing and kickboxing, a bare-knuckle fight will be a new experience.

Page might be confident given his overall combat sports experience, but Perry said he better watch out. “We’ll see. It all depends. He thinks it’s just normal fighting,” Perry said. “… It’s gonna be different.

He’s gonna learn some things. Maybe he doesn’t think he’s gonna learn anything in there, (but) he’s in for a rude awakening. Because he’s sleeping already. I’m gonna wake his ass up and then lay his ass back down.”