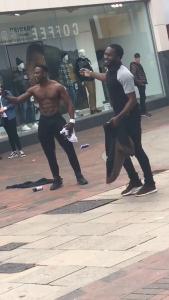 Often it’s the loudest mouth that can’t back it up when push comes to shove. It always seems to be the quiet, reserved, The dangerous types that do the most damage when the fists start flying. Whether this is because they’re more dedicated to the cause, or just don’t have as much blood rush during the encounter is up for debate, but it is surprising how often, loud-mouths get their asses handed to them. Whilst we like it when someone shooting their mouth off gets what’s coming to them, but the clip below is the exact opposite when the guy doing the talking and showboating backs it up with some solid mitt and shoe-work. 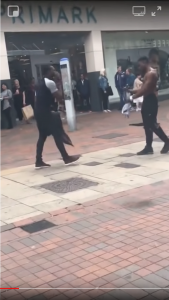 As the clip opens, we see an inexplicably shirtless, jacked up bodybuilder parading around the town square in Chatham, England. He looks like he means business, a serious look on his face as he dares his opponent to fight him. Another man, in a black t-shirt is conjuring crowd support, having cleared an area in the middle of the street to throw down with the other guy. 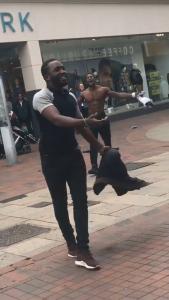 He yells and screams, boasting, “I fought at Sweatbox!”. Sweatbox could refer to a boxing gym in Chatham whose Instagram boasts 61 followers. He doesn’t want to fight the guy in the street, voicing that he would prefer to fight him in the gym. Anyhow, despite the underwhelming claim to fame, the other, quieter man approaches to get the fight started, coming in while the other guy still holds his jacket. 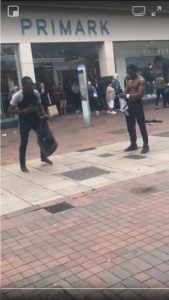 But the loud mouth is up to the challenge, offering a startlingly fast counter punch. The topless bloke sprawls backwards but gets straight back to his feet. Coming in fast again, the guy in the black t-shirt lands a couple of nice fending jabs before the killer cross comes. He connects sweetly, knocking the topless guy to the concrete with a crashing thud. A swift kick to the ribs before diving in for a wrestle sees the fight descends into a tangle. Members of the public come in to stop things before the topless guy is choked to death. Check out the action here: