Her Loud Mouth Got Him Eliminated…. Should He Leave Her? 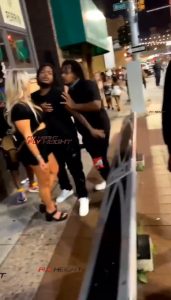 A young white lady was getting verbally abusive to three young black men, who looked really mad at the white woman. They kept exchanging verbal insults at each other with little or no physical contact. As one of the men wanted to get physical with the women, one of his fellow angry mates tried holding him back, but as hard as it seemed, he was successful in holding him back from getting physical with her. 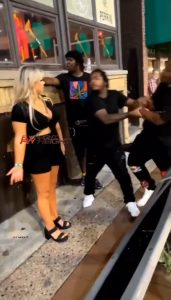 As a normal fight on the street would have many spectators and cameras, this was no different as a lot of people gathered around them to watch the ongoing argument with the cameras on their phones pointed at them. The seemingly calm man who had his anger under control, who also tried to keep his friend from becoming physically abusive with the woman, could not hold more than one person. 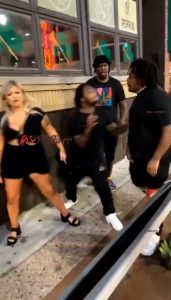 One of the onlookers who was presumed to be the boyfriend of the lady was the support of the woman could have been presumed to be talking down on the angry men and got punched, everyone here thought it would be a normal punch, but that knocked off the man which caused panic, as police officers tried to find out who punched him. 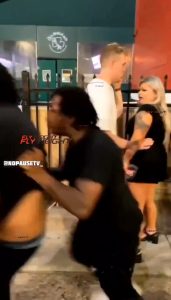 As tension increased, and people panicked, more people on the street gathered at the scene to find out what was going on. Police officers tried to keep the whole situation under control, which they were able to do. They instructed that the knocked off man be placed in a recovery position which ensured that his airway was kept open and clear, and also to prevent fluid or vomit from causing them to choke. 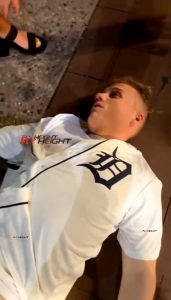 The woman who was initially involved in the argument confronted people who were laughing at the whole situation but that didn’t stop them from laughing instead it made them increase their laughter, telling her that she got her man knocked out because of her talking too much. Gradually the whole scene became clear as the police officers were able to get the situation under control.