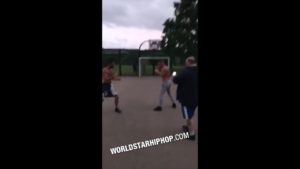 Bare Knuckle boxing is a big part of Northern English gypsy culture, and one of the most feared travelers going around is a bloke known has “Hands McGee”. The terrifying brute is quick, powerful and downright hardcore. In the video below we see Hands in action as we open on an open-air caged football pitch.

The daring challenger is apparently an accomplished MMA fighter and a large crowd has assembled with beers in hand to watch the action. The pair doesn’t waste any time, engaging in combat without any designated referee or rule-breakdown. 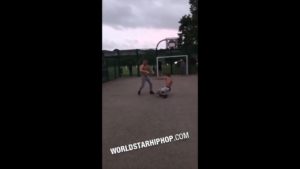 The two square off with McGee being the first to throw a punch. His flurry catches the MMA fighter off guard and allows him to come in, grab him around the waist, pick him up and dump him onto the concrete ground.

It’s a brutal maneuver which divides the crowd. Some think it’s okay, but others think the terms of the fight were that it was to be fought on the feet. As the two grapple on the ground, Many from the crowd yell out to stand the two of them up.

A fat bloke comes in to try to break them apart and eventually succeeds. The two are reluctant to give each other any space because they have both shown striking ability in the early stages. As they separate, it is McGee that exerts dominance in the fight landing a series flush blow to the MMA guy’s jaw. 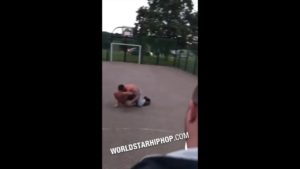 It rattles him, but he shakes it off. The MMA fighter obviously has a fair strong resilience to strikes as he has taken a few by this point. It is not long before Hands McGee shows his trademark move: a massive right delivered powerfully to his opponent’s jaw. It is enough to knock MMA dude down.

He’s definitely seeing stars. But, in what many view as a fairly dog act, McGee takes a run up and kicks the MMA fight in the head, knocking him out in disgusting fashion. He lays motionless as McGee parades around looking for another opponent to fight. He even goes as far to approach his sleeping opponent to put the boot in again. The crowd intervenes, thankfully, ushering him away.